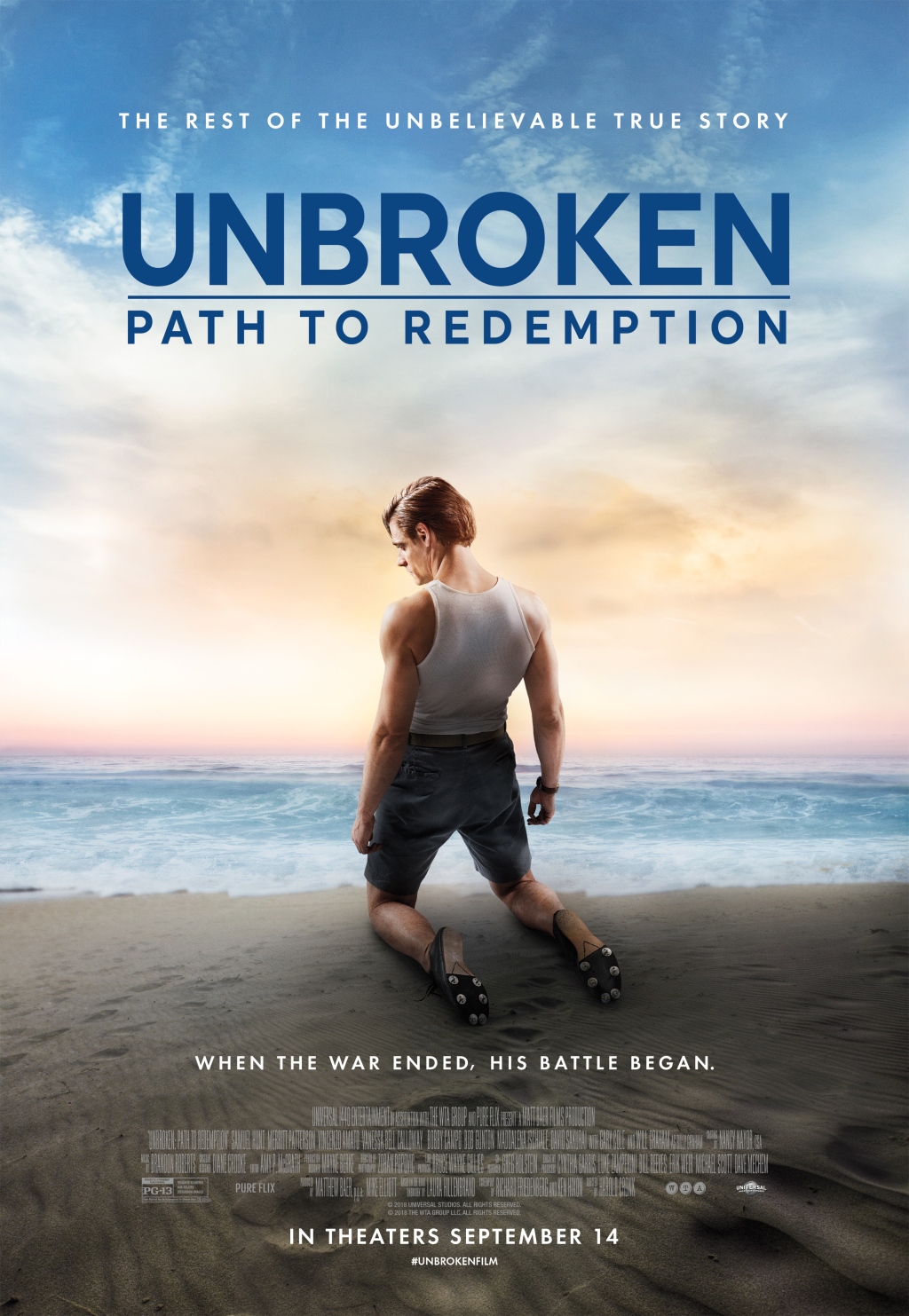 Louis Zamperini: A WWII Veteran, Olympian, prisoner of war, Christian evangelist, advocate for at-risk-youth and American hero. His story, undeniably, epic. His legacy, timeless. However, do we know the man who was simply known as “Louie?” Behind the legend was a human being with questions, a past, struggles, deficits, and brokenness – just like you and me. This is where “Unbroken: Path to Redemption” bridges the gap. Prefaced as, “the inspirational true story continued,” the distinctive of this film is faith and while the road to redemption is broken, it is also in fact, cathartic because it’s able to resonate with those who experience these very human realities. This month, I was honored to talk with the film’s executive producer and son of late Louis Zamperini, Luke Zamperini, on trauma, hope, forgiveness, his parents, and what he believes his father would say about this new film.

This film is based off Laura Hillenbrand’s biography Unbroken. In 2014, “Unbroken” directed by Angelina Jolie gave the first half of your father’s story. This story of course picks up where the second leaves off. How important is it for you to share this second half of the story with moviegoers?

Luke: The climax of my father’s story is his struggle with Post-Traumatic Stress Disorder, as manifested in his hatred of the Bird and his desire for revenge that eventually broke him, and his deliverance from this condition by coming to faith in Jesus Christ, which gave him the strength to forgive his former tormentors.

One of things I appreciated so greatly about this film is its ability to show the reality of what it means to be a broken human being. After I finished watching it, I honestly thought, this is the best Christian movie I’ve seen. Mainly, because it was refreshing to see such honesty and rawness in a film that does not shy away from real-life issues like trauma, depression, addiction, anger, anxiety, disappointment, etc. and the root cause of those issues. Why do you believe this quality to this film makes it unique?

Luke: The strength of this film is not that it is based on a true story, but that it is a true story.  Everyone that worked on the film has been impacted by my father’s story so this project became a labor of love for the cast and crew, and it shows.

Many have known that your father suffered greatly, primarily in the aspect of surviving years of torture as a prisoner of war. However, many don’t know how much he suffered after coming home from WWII dealing with PTSD and other life difficulties. Suffering clearly is a very real theme in the film. What do you want others to know when it comes to this subject?

Luke: I want people to know what my father wanted them to know. You can overcome any obstacle in life through faith in Jesus Christ.  One of his Bible verses is Romans 8:28,  “And we know that all things work together for good to those who love God, to those who are the called according to His purpose.”

Samuel Hunt and Merritt Patterson who play your father and mother in this film did an amazing job. What were your thoughts on their portrayal of your parents?

Luke: Uncanny! It really was like watching my parents on the screen.

Luke: My hope for them is that this film gives them hope. If my dad could overcome PTSD through faith in Christ, so can they.

Everyone has seen your father, Louis Zamperini, as a hero. Yet, this movie really showcases another hero who was your mother (Cynthia). Her fidelity, unconditional love, and forgiveness she extends to your father in this movie is really inspiring. What do you hope others glean from her life?

Luke: Don’t give up on the ones you love when they are struggling. You must face hardships together. Marriage is more than the sum of two people, it is synergy.

The “path to redemption” ultimately leads to your father’s surrender in coming to Christ after being invited by your mother to a Billy Graham crusade. As the new year approaches, many people are going to try to make resolutions to better themselves when we believe as Christ followers that the answer is simply, more of Jesus. Your father found this out – we cannot save ourselves, we need a Savior. What do you want others to know when it comes to this truth?

Luke: We are incapable of entering God’s heavenly kingdom by our own good works because the requirement is to be as perfect as God is. Which obviously, we are not. However, through the perfect life, death, and resurrection of the son of God, Jesus Christ, we can enter by having faith that his sacrifice paid the price for our sins to be forgiven and made us acceptable in God’s eyes.

As this film introduces the life and legacy of your dad to a new generation, what is your desire that they would take away from it?

Luke: There are many things I would want a new generation to know such as freedom is worth fighting for, which is why my dad joined the military. But most importantly, faith in Christ will change your life.

I would also like them to know that my dad’s legacy lives on with The Louis Zamperini Foundation (www.zamperini.org) which, among other things, is developing an immersive companion curriculum to the book “Unbroken” for use in public High Schools.

You’ve heard all of the stories from your dad growing up. What has been your favorite?

Luke: I have many favorites. The most exciting for me is day 27 of his ordeal at sea when a Japanese plane was strafing the life raft and he had to dive overboard to evade the bullets only to be confronted by sharks. The most satisfying was of course his coming to faith. If that had not happened, I might never have been born.

If your dad was here to see this film. What do you think he would say and why?

Luke: My dad would say that his entire life, everything he went through happened for a purpose, and that purpose was to testify to the life changing knowledge of his Lord and Savior, Jesus Christ.  And that “Unbroken, Path to Redemption” faithfully portrays that reality.

For more on “Unbroken: Road to Redemption,” visit unbrokenfilm.com