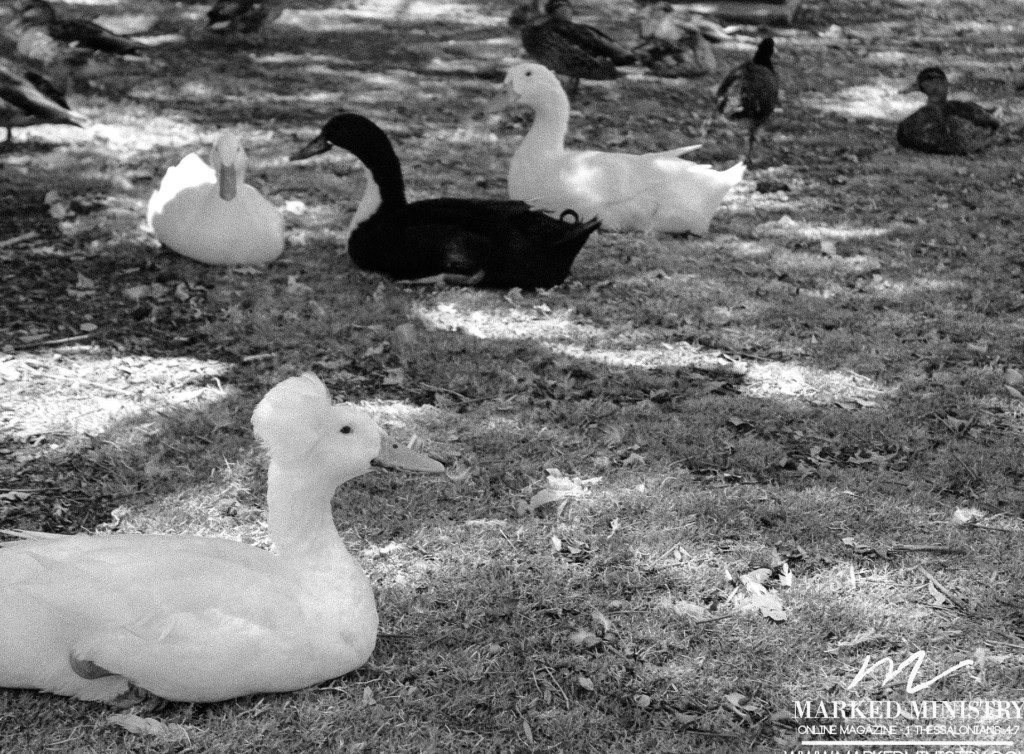 Just Ducky
Why Church and ‘Pretty in Pink’ Go Together

My life often looks like the 80s brat pack film, Pretty in Pink. I relate a lot to misfit Andie. Like her, I create my own style but also have a band of quirky friends like her post-punk, new wave BFF Ducky and eccentric vintage-loving record store work pal, Annie. And if Andie, Ducky, and Annie went to church, it would look a lot like this.

Lindsay was a friend I met at a winter retreat in high school. She had a mohawk and leather jacket dawned with safety pins and she’s a pastor’s daughter. We struck up a convo because Lindsay was, in fact, alone at camp. Lindsay didn’t fit in. Michael marches to the beat of his own drum, literally. He’s a musician and worship leader who is defiantly himself. In some seasons, he’s totally long hair-hippy and other times, he’s opting for short hair, white converse and Mic Jagger pin-striped pants. Yep, there’s nobody I know like him. But sometimes, that the thing that can get him down. Then there is Kelsey. She’s got tattoos and is more comfortable in combat boots and something in the color black. Kelsey is a small group leader and in full-time ministry. Yet, while hanging out one day, she shared how she felt like others labeled her as “non-Christian” because of her look. She was hurt and wondered if she belonged. Then there is Danielle. She is a hairstylist who loves wearing big spiky chokers. Her husband says she reminds him of Janis Joplin with her rock-n-roll style. Danielle is also a leader in the church. We met a purity conference where she talked about why the church needs to be not so “cookie cutter.” She felt it. So did I.

For the misfit, different is normal, and it seems like the world around us is OK with the diversity. However, the gap seems to get smaller at church. Why is that? Why does the person who is different from the masses feel accepted by the world and so rejected and displaced at church?

For one, we’ve sadly let legalism fuzz our perception. Legalism is all about rules. Do’s and don’ts. The religious people were good at this in Jesus’ day. They wore long robes that would make them appear “holy” and accused Jesus’ disciples of being dirty compared to their meticulous selves (Mark 7:5). Yet God called these people whitewashed tombs which are outwardly beautiful but full of death inside (Matthew 23:27-28). Eek! They looked “holy” on the outside, but inside their hearts were dirty. Jesus called out their hypocrisy and attitude that went against His heart. Religion does this. It focuses on outer aesthetics and says, “ship up or ship out.”

Another area this appears in is with cultural and societal expectations. Everyone in the “OC” wears this label or shops at these stores. The expectation is already there, and it filters into church. Yet, it’s all we know, and it becomes the norm. Therefore, we wonder what’s wrong with that person who doesn’t meet these expectations. Have you ever heard an elderly church person criticize young people because they aren’t in ties or dresses? Or what about the hippies in the 60s who filled pews wearing something quite different than the standard of clean-cut Sunday best attire. Other times, it’s change. We’re not familiar with it. Therefore, we are unsure of accepting it. It interrupts the flow of what we’re doing. Maybe that’s a good thing? Instead, we doubt it, so we create special services or ministries to accommodate “those” people. And somehow, everyone who looks a little edgy must belong in our church recovery group, right? Wrong. I once heard a girl I know who’s a leader in this kind of recovery group say, “let’s face it, we [the group] is the ugly stepsister of the church.” That, my friends, should not be.

We’ve been taught to believe false perceptions. All distressed jeans are “bad,” and long skirts are “good.” Pastors are questioned their credibility because they are too “hipster” for church and have tattoo sleeves. Sorry, but doesn’t this look a lot like the religious people of Jesus’ day? And it seems like we knew where Jesus stood when he publicly rebuked their behavior.

Another one is that we judge. Eww, gross. I know. But yes, this does leak into the church as well. Tragically, we have the capability to tear down without words and actions. We can embarrass and reject. We can hurt others. I myself experienced this first-hand when a girl I met in junior high. I was at a new church and was befriended by the popular youth group kids. Since I had friends from a lot of different groups, I didn’t think any differently about it so I reached out in friendship––until they turned into “The Plastics” from Mean Girls and began attacking a girl I met at summer camp about her braces. It had to stop. So I did the job and took the exit of youth group popularity. Cliques are subtle or not-so-subtle. They make others outsiders and enforce conformity when unconformity should be welcomed. Yes, even the church rejects and judges by appearance. In the Old Testament, a guy named Samuel did this. He wasn’t in junior high, but he also judged by appearance. He was a godly prophet of the nation of Israel who God assigned to anoint their king. Scripture tells us this when He went to a guy named Jesse’s house and scouted out his sons. Samuel noticed the guy he thought would look the part. Samuel? No way! Yes, way. This is what God said. “Do not look on his appearance or on the height of his stature, because I have rejected him. For the Lord sees not as man sees: man looks on the outward appearance, but the Lord looks on the heart,” (1 Samuel 16:7, ESV). Yes, judging could happen to any of us, to junior high and the Samuel leaders in the church. We all must guard against it.

Then there are the times we unintentionally segregate and hold the invisible, “you’re not welcome” sign. We offer ministry activities for a certain type of guy or girl, but not all girls want to do crafts and not all guys want to go play volleyball. Usually, that artsy girl or guy is not that type and usually, looks quite different. How are they considered in church? When we make church one size fits all, we naturally exclude, and sometimes it’s unintentional. This is what happened to me at church. I looked nothing like any lady I’ve seen in ministry and, to add insult to injury, everyone in ministry looked like one other. This, in fact, made me feel (for a brief period) like I was sticking out like a sore thumb. Sometimes, church can have a silent dress code and when we don’t adhere, we can feel like a misfit. But, just like I learned in a moment of insecurity, I had to be OK with being me. And you should too!

Going back to Pretty in Pink, Andie ends up dating a guy named Blane, who’s a part of the popular rich kid group. Basically, the whole movie unpacks how they learn to be together, versus being apart (even when the odds are against them). Even Duckie catches the eye of a popular on-looking girl at Prom! Essentially, this is God’s design for the church. We’re meant to see the beauty in our differences. We’re meant to fight for each other. We’re meant to be together. Although the world would say an Andie and a Blane could never make it, God’s design is that we would. Like most relationships, opposites work well together and are actually more interesting. Therefore, we need to stop looking for sameness and embrace uniqueness and we need to see the beauty in the diversity. Then, and only then, will church look a lot more like Pretty in Pink – Ducky.