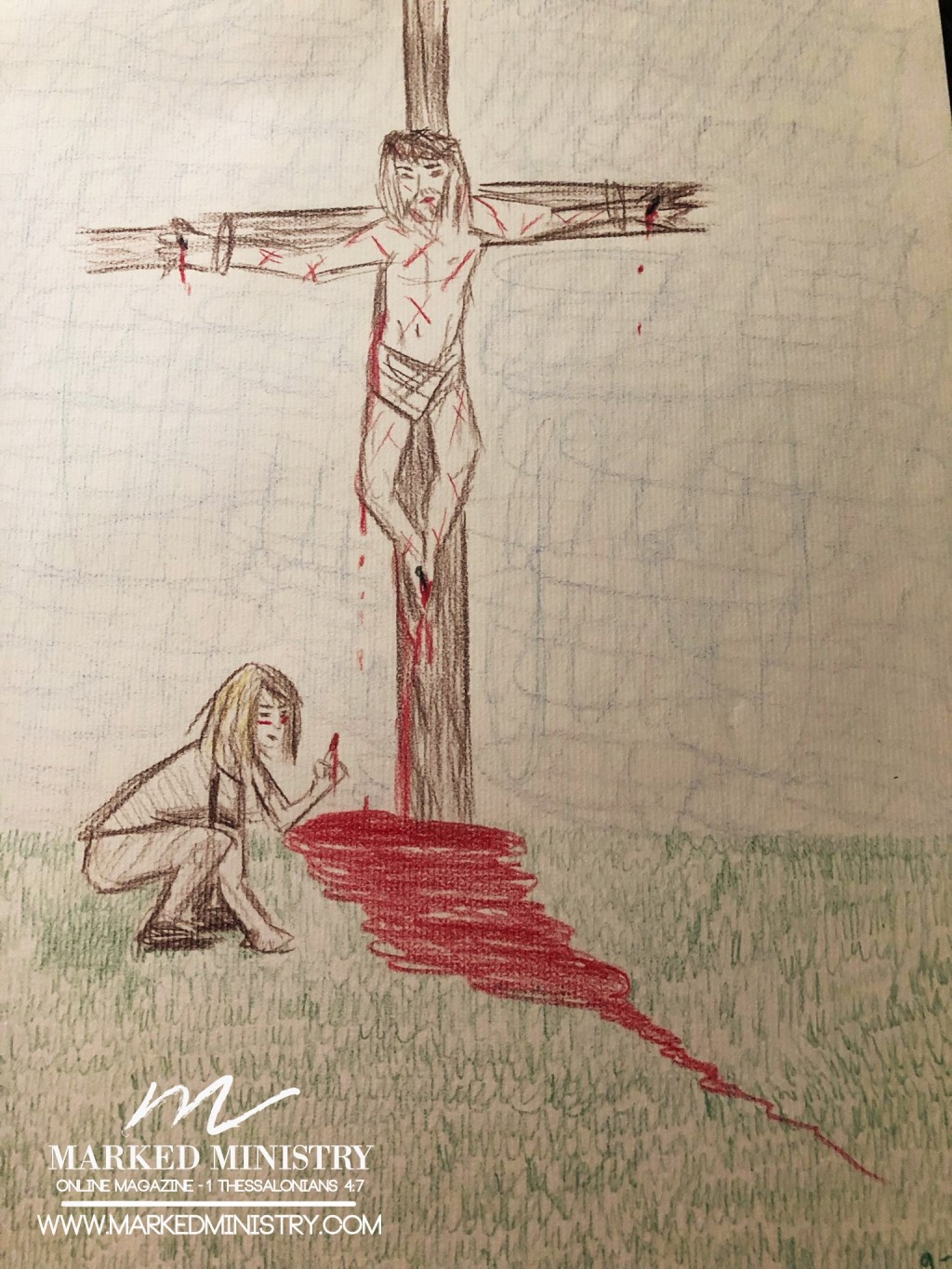 (Drawing by Kiersten Ellis and photo of Kiersten courtesy of fightingforme.org)

The Workings of a Warrior
An Interview with Warpaint Campaign Founder, Kiersten Ellis

Kiersten Ellis is a warrior. A survivor of childhood sexual abuse, Ellis found hope when she reached her end. Ellis, at the time, had come out of the homosexual community and into church where she served and was placed (reluctantly) in leadership.

Falling into cycles of depression, anxiety, suicidal tendencies, and struggles with the homosexuality topic, Ellis would face ridicule from the very place where she found God, describing her experience from onlookers as, “the golden child falling.”

She shares, “Instead of reminding me whose I am and who I am and really loving me through that, I got a lot of ridicule. So, I really struggled with God. There was a period of time [where] I was absolutely beside myself because here I knew Jesus, I accepted Him as Lord and Savior, yet I can’t seem to break these cycles. And then my peers and leadership and everything has lost complete faith in me, and I felt like I had to prove Jesus was real through my actions. Which isn’t true but that’s how I felt at the time.”

Unable to break though these cycles in her own strength, God met Ellis on a car drive with a vision that would soon become The Warpaint Campaign. The vision was of Jesus at the cross and a girl (Ellis) who used the blood of Christ as warpaint. A drawing she would later sketch to never forgot how God personally met her.

“I think it was God’s way of telling me that I’m worth fighting for, and that I’m loved, and that He paid the price,” she says. “It was Christ that fought for me and I was worth it to Him and that really brought a lot of hope to me at that time.”

Proving healthy Christians that saw her value and spoke into her life according to Scripture meant everything to Ellis noting, “They would cast down lies about what I suffered or what my actions were. They were cutting through those lies.”

Running into a small non-profit called Fighting for Me Inc., founded by Amanda Zarate, Ellis began considering counseling for further healing to break free from unhealthy cycles in her life. When she began walking through past traumas with a counselor, the experience was life changing and the cycles and behavioral patterns dissipated, crediting her actions as a symptom of trauma, which she identifies as the things that “did damage to her soul at a young age.”

In 2016, The Warpaint Campaign was presented in a coffee shop. The purpose: let people know they are worth fighting for.

“I want people to know, ‘Hey, you don’t have to carry that shame. You’re worth something. And when you’re ready to face the pain of the past, there is a community of people out here, we’re gonna stand beside you because it gets messy.’”

Ellis confesses, “Just because time marches on and you kind of move past it and it dulls a little bit, it still affects your life and I don’t want you to have shackles on your ankles. I want you to walk freely and I want you to run. Christ doesn’t want that. He paid the price. He died for you. It’s done. You’re an overcomer because of what He has done. But I do understand sometimes you have to stop, turn around, and deal with the things that are haunting you, and that’s very hard to do. And you need all the support you can get without all the shame. All the ridicule. And yeah, it’s gonna get complicated, but Christ walks you through it. And I understand counseling can help people but, ultimately, God heals people.”

Find out more information about The Warpaint Campaign by visiting fightingforme.org/warpaintcampaign/as they officially launch April 1st, 2019!