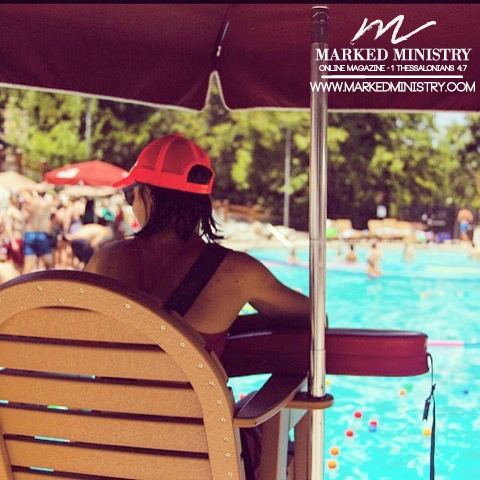 Why I Love Lifeguarding

I wake up at 4 a.m. four times a week––just to watch people swim at the Y. Some might say I’m crazy, but it’s something I look forward to. Of course, I hit “brew” on my coffeemaker first thing and walk into the gym like a zombie, but that temporary exhaustion wears off once I climb up onto the lifeguard tower.

Four-and-a-half years ago, I took my first lifeguard class. I clearly remember that gloomy day––dark clouds, an unheated pool, and rain included. Although I knew I wanted to be a lifeguard since I was a high school junior, I also had no idea what I had just signed up for. Let’s just say, performing the rescues didn’t quite come naturally for me. I wasn’t a total failure, but my classmates sure surpassed me.

Things took a turn for the worse when we started backboarding drills (this was during the time when the Red Cross still taught this skill with four people instead of two). I couldn’t remember the difference between the primary, secondary, tertiary, and quaternary rescuers. Was I supposed to do crowd control? Who was in charge of placing the head pieces and clipping in the straps? Who got out of the water to pull the backboard onto the pool deck? And I’ll never forget when my instructor said, “You just let your victim die!”

During my whole first year of guarding, I was pretty timid––not nervous, but also not overly confident. I always wondered if I looked “right” on stand, or if I’d totally mess up a rescue due to adrenaline. Because of this insecurity, I came home exhausted from guarding some days. Although I enjoyed it, I wouldn’t say I was super passionate about it at this point.

Three months after camp, I got hired as a lifeguard at Biola University (where I attend school). I think Biola is where my passion first developed because it was slower-paced than camp, which gave me a chance to practice my skills without feeling pressured. Also, I was usually the lap swim lifeguard, so I got a chance to talk with several people each day; both the regulars and new patrons.

Eventually, I realized that I loved talking to people and listening to the stories they told me. I was just a 19-year-old college student with a red lifeguard t-shirt, sweatpants, and a messy ponytail, yet they wanted to talk to me. At the time, I was actually super shy. Most people couldn’t get a peep out of me unless they were my best friends––then people couldn’t get me to shut up.

Soon, I started becoming more comfortable with talking to complete strangers and sparking conversations. Now that I’m almost finished with graduate school, I’m amazed to see how much more outgoing I’ve become. Even to this day, I look forward to the stories people tell me at one of the places I lifeguard for: a retirement community.

A year later, I realized that I was always so happy during my lifeguarding shifts, even if things went wrong. I so looked forward to being by the water because it’s my stress-reliever. My junior year of college was crazy stressful since I had a packed schedule, while battling gastritis and GERD that resulted from intense OCD, so constantly being at the pool was a blessing. I had days where I felt completely mad at the world, yet my mood flipped a 180 after a couple hours on stand.

Last fall, it finally clicked: lifeguarding was my element. Not only had I become good at it, but I thoroughly enjoyed it. I had thought about giving it up to pursue other kinds of jobs, but I just couldn’t. My drawer of 10+ lifeguard shirts, two whistles, and eight swimsuits is enough proof of that. It inspired me to keep lifeguarding at Biola and serve as a summer camp lifeguard for another season.

Actually, working a fourth summer as a camp lifeguard really opened my eyes to something I hadn’t considered before. This summer, I had the chance to learn some ins-and-outs of aquatics that I hadn’t previously known, such as figuring out how much chlorine to add to the pool and what the acceptable chemical numbers are.

After summer ended, I went into lifeguarding full-time off-campus because I have a lighter course schedule this semester, so I wanted to try working at other places. Right now, I lifeguard for the YMCA and Premier Aquatics, but I also teach swim lessons for Safe Splash Swim Schools (Orange County/LA). Between these three jobs, I work about 50-60 hours a week.

When I first tallied up my work hours, I panicked a bit; I wasn’t sure if I could handle it. What if I became too tired? What if I got bored of lifeguarding? Thankfully, these fears didn’t come true––just the opposite. I actually felt much more energized and loved lifeguarding that much more. That’s why I drive 40 minutes, four times a week, to a Premier Aquatics.

Strangely enough, work is actually something I look forward to, and a lot of people can’t say the same about their current job(s). Of course, problems arise on shifts. Even so, I look at the great moments of my day and just laugh off my stupidity––such as when I worked 14 hours this past Saturday and locked the facility keys in the lifeguard shack because I was that tired. My friends and those who know me well would say I’m obsessed with lifeguarding, but I take that as a compliment.

About a month ago, I realized that I really want the experience of managing my own aquatics facility, plus a lifeguard/swim instructor staff and a swim team. That’s why I’ve decided to postpone my career in copy editing for a bit and pursue an aquatics director position. I just got my Certified Pool Operator license as well as my Lifeguard Management Certification, and I will soon have my Lifeguard Instructor and Water Aerobics Instructor certifications.

To be honest, I’m a complete nerd when it comes to aquatics. I have my own fanny pack and rescue tube, plus my very own Taylor 2005 pool chemical test kit and pool operator manual. Checking out the pump rooms at the various pools I work at just enthralls me, and I even read through the American Red Cross Lifeguard Manual for “fun.”

All in all, I discovered that life is much better when you’re doing what you love––both for yourself and those around you. That’s what lifeguarding and the aquatics world is for me: a passion that has significantly shaped me since May 2015 into the person I am today.