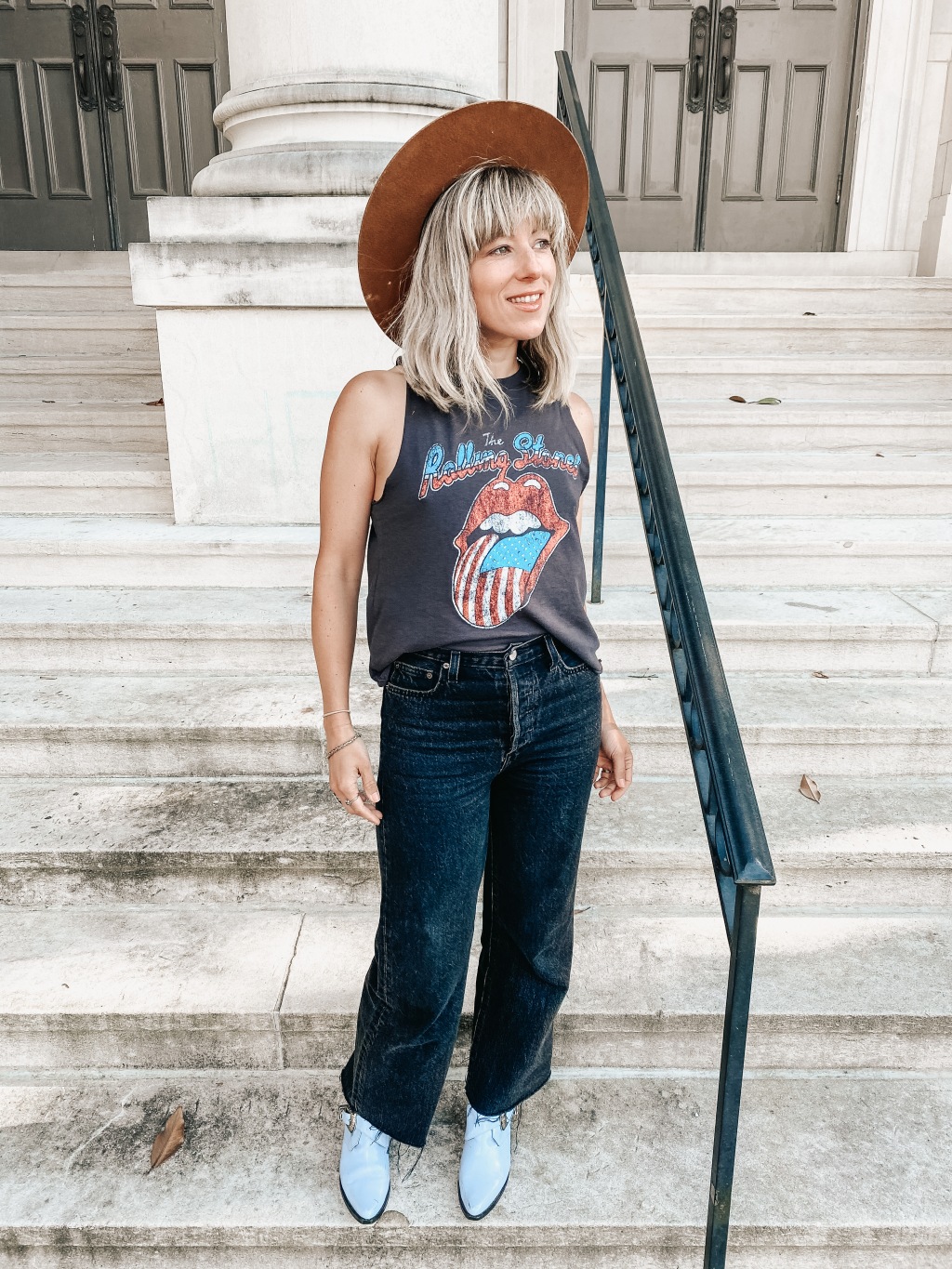 Jodi King is the kind of person you want to talk to in a pandemic. She gives you permission to show up for your real life. For example, the time right before our interview was about to begin when my voice recorder misbehaved. The moment after an apology, we both laughed as the songstress of the husband/wife duo Love and The Outcome offered, “That’s always gonna happen, right?”

It is also the same quality she extends to her Instagram followers when she shows up to lives in active wear, no makeup, and freshly-washed tresses. It’s the smile she gives when she and husband Chris sing and play together in their house; while kids jump up and down in the background with miniature guitars on Worship Wednesdays. It’s the margin she gives for meltdowns, impromptus, and wild adventures; the quarantine life that many of us have related to in the past weeks (and continue relating to).

And, it’s with the same vibe that she thanks Chris on our chat for holding down the fort and giving 30 minutes of dad time to make this interview possible (we thank him as well!)

When asked to tell a little bit about herself, she is simple. She’s a girl from the middle of Canada. Winnipeg Manitoba, to be exact, who’s been singing into her hairbrush since she was three.

“I just love to perform and I was so free and just full of life when I got to sing and perform, and I guess I’ve never really grown up or grown out of that completely, but now it’s a real microphone,” she laughs.  “Man, I think there are so many clues to what God put in us to build His Kingdom from when we are little. But some of us really think that if it’s not our paycheck, then maybe we shouldn’t be using it. Maybe it’s not valued. My passion happens to be my paycheck right now, but it was not always, and it probably will not be forever. Who knows? But that’s not the reason I do it. So I just feel so excited to get this season to travel with my husband.”

After meeting her husband in her hometown through a band she was singing with––and getting married a year later after touring together––she said “yes” to what lit them up as a couple.

“I sang in bars. I sang in churches. I sang in coffee shops. Giving my “yes” to that was my way of having faith and exercising my faith muscle with no idea what I was doing and no idea of exactly what my sweet spot was with the Lord and how He wanted to take my gift and really turn it into a calling and that sweet offering He had called us to give.”

Down the path, Jodi and Chris lived homeless in her Jetta for a few years, and after eight years of a long winding road, signing a record deal, she and her husband  moved to Nashville, Tennessee where their music career took flight.

“The long road is not the wrong road. It was really validating just to come to place of going, ‘I just want to sing for You and communicate what you put on my heart. And if it’s 2 million, great, and if it’s to ten, great, but I think I found my sweet spot with You.”

In retrospect, it was all the lessons of imperfection that made her story her own. One of them was learning how to pause in life. Since she’s a person who is naturally on the move, Jodi reflected on a time two years ago when changes at her record label enforced a pause for her and husband. The frustration and lack of control of the situation beyond her grasp caused the artist to feel stuck. She reflects, “I was like, ‘God we just got a bit of momentum and this and this was supposed to happen and it’s not, da da da.’ And now, I’m really thankful that in that season of really working that out with the Father, because He loves it when we work it out for real––the yelling and the frustration, that’s all on offering that we can bring to Him that He can handle. And I really found Holy Spirit whisper, ‘You’re not stuck. Even when your stuck, I am still moving. Your just on pause.’ My new prayer is always, ‘God show me your perspective on the situation.’ I’m really surrendering my timing in following His.”

The topic has been one so close to home that a new single entitled “Moving On” is the focus at hand.

“Going into this Coronavirus crazy season, I’m really thankful for that struggle because now we’re all on pause. It’s this forced pause. And I think I would have a much tougher time. It’s still been hard for sure, but having that perspective shift has been really, really, huge for me in this season.”

With pauses in our regularly scheduled programming, the artist was able to make time for other things. One of them was writing.

“I was writing about all of those things. About feeling stuck. About, all the things after being a signed band for six years and being told what I was supposed to do it, the way I was supposed to do it and realizing that a lot of the intimacy with The Father had turned into more of a formality. Just kind of going back through the journey from just being so desperate and chasing my dream to getting the dream and then, the passion becoming paycheck and all that came with that. Touring 250 dates a year, getting married, and having kids and just coming to the other end of it and just going, ‘Oh my goodness I have had so many revelations and so many messy moments I need to start writing these down.’”

Interestingly, the new author who just wrapped a Kickstarter campaign for her devotional, “You Got This,” (soon to be released this summer to Amazon), didn’t foresee her writings as a book. After nudges from her husband and Holy Spirit, King still was plagued with limiting beliefs about herself including her inability to be a writer, speaker, or preacher.

“The Holy Spirit was like, ‘that’s right, so do a book your way. There’s no rules for this.’ And I think that’s been a huge lesson for me––is that there are so many things we attach rules to where there’s actually freedom in Christ. You can do it your way, just honor Him and be obedient with what He’s given you to say. Your tests are your testimony to share. So that pause season led me to have a bit of courage to put some feet to my faith. I know that I’m not the only one that needs to redefine what confidence is and needs to know that they could show up as they are because that’s all God asks us to do. To be obedient and let Him lead us and ignite what we do.”

She continues, “It’s so tempting to try and do your life the way people are going to approve of it and not necessarily live it in obedience. They’re really different things. And it’s such a fine line sometimes between the root of why I’m doing what I’m doing. You know? Is this coming from a place of needing approval or is this coming from a place of purpose and knowing that no matter what, I need to be faithful with this. Those are questions I ask myself a lot. That helps me undercover. Because being a mom and an artist especially in a season of quarantine where their all meshed together, I sometimes don’t know what I’m thinking [laughs]. So, it’s like, ‘OK, let’s stop for a second, is what I’m doing right now something that I have put on myself or something God’s called me to do? And, is this a to-do list I made [laughs] and I’m just checking off the boxes to feel productive or did God initiate some of these things?’ Just trying to be really aware of what He initiates because there’s so much freedom to flow in that when He initiates it then when I push and try to do things my way.”

On the subject of identity and embracing the imperfect, she shares that owning our own moments and mistakes prevent them from owning us. Something she is currently working on.

She notes, “I used to wait to try to look as perfect as possible, sound as perfect as possible, and have the perfect Instagram picture and it was so paralyzing. About two years ago, I never even turned the camera on myself for stories, I wouldn’t post any. When I finally just realized, just show up, be who you are, turn the camera on yourself with or without makeup, let people into your mess for them to see the message is that you need Him. Nobody really wants the friend that is always so perfect! It’s like, for goodness sakes, just let me see the real you! I feel like every time I’m a bit embarrassed and sharing my vulnerability, it’s really somebody else’s encouragement.”

She confessed that in the process, she realized that she was “just really good at helping other people and being a consistent friend” but when it came to letting those friends into her needs, this was a place of difficulty. The antidote – be vulnerable. Taking these steps has helped let people in along with seeing social media differently. Instead of seeing it as a place to receive validation and show up as a perfect leader, it became a place to love people and be loved back.

“As soon as I could see it like that, it changed everything and became life-giving instead of life-sucking. Once I could figure out it was a tool for loving people and encouraging people, and there was no perfection attached, then I could slowly take steps towards, not just saying show up to your messy life with a perfect house but going, ‘here I am with my messy life and my messy house!’ People don’t relate to you by saying your vulnerable, they relate to you when you are vulnerable.”

Find out more about Jodi by following her on Instagram @iamjodiking and by Checking out her band Love and the Outcome by visiting loveandtheoutcome.com