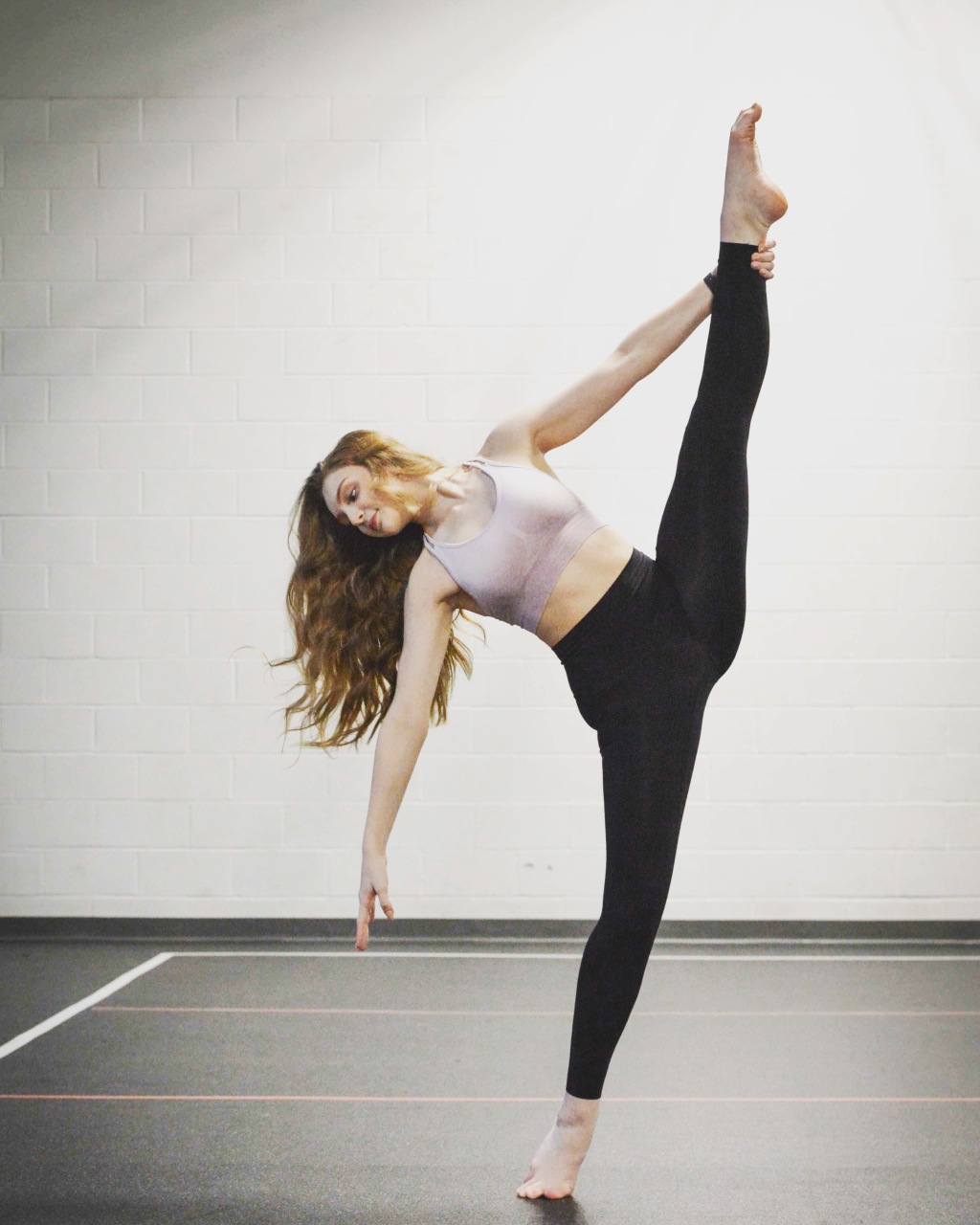 At the age most toddlers get the hang of walking, Sarah Ashley Hunt was dancing. When most kids go off to kindergarten, Sarah stepped foot in her first studio, and at eight-years-old, this dancer went on point: something unheard of in the dance community.

Along with these rarities, Sarah also at the age of eight got her first dose of reality TV when she was scouted for the Lifetime hit show Dance Moms. The same show that made dancers like JoJo Siwa and Maddie Ziegler famous under the instruction of the infamous founder of Abby Lee Dance Company, Abby Lee Miller.

In the process, Sarah and her mom Christy became household names.

Amidst the controversy of the show and Abby Miller’s personal life, Christy and Sarah agree that God used the show to transform their lives for the better.

“Despite what everyone gets to see. It is nothing like that. It’s the show, if that makes sense,” states Christy. “Abby is such a dear friend of ours. Sarah’s still training at her studio. Everybody is such good friends but in the midst of it, you’re like this [puts her fists together], and the producers right there are causing this tension.”

Beginning at a local rec studio, Christy (who recognized Sarah’s gift in dance) knew she needed more as she continued to advance in the artform. In came Abby Lee Dance Company. A place they both acknowledge as a godsend where Sarah could also be a light.

Not being able to even do a split at the time, Sarah was launched into the most intense and most incredible training of her life, as her mom noted.

“In a years’ time, they pulled everything out of her – the blessing and the training they were. At a young age. They took her from nothing to everything. It changed her life.”

Training with seniors in high school. Sarah got the experience of literally a lifetime.

“I would not be where I am today without Dance Moms. It makes you grow up at a really young age, and it makes you be able to go out into the world and do different opportunities. It was such a big stepping-stone for my career and for literally anything I’ve done.”

When asked how she keeps her faith strong while being in the entertainment industry, she confesses, “I just cling. Every day, I live for Him. My motto has always been, ‘Give God your best and leave the rest up to Him.’ So that’s literally what I tell everybody.”

Christy adds, “To see her from where she started to where she is now in her faith and to claim it for her own has been the biggest blessing. You have to make your faith your life; your faith is your life. He is your life.”

Getting into the dance artform itself, I asked Sarah if the ballet, lyrical, contemporary, genre that is her forte was always her favorite.

Her answer surprised me.

It traced back to Abby Lee Miller.

On her first day with the new dance company, she asked Sarah’s father––a contractor––to check out something at her home, something Christy notes as “typical Abby.” Upon the encounter was a bigger prophetic moment for Sarah, her destiny spoken out by her dance instructor.

Christy agreed, noting “It took off. Abby’s known for lyrical, ballet, and contemporary. It began this inner fire that I don’t even think she recognized.”

When asked what personal creative work that Sarah is most proud of thus far in 2020, she recalls her choreographed work in her living room, when she would make up her own dance moves.

Now at the Millennium Dance Complex Pittsburg under the instruction of her beloved choreographer, Kelsey Patten, she has had the opportunity to use Christian songs in class and dances to a variety of Christian artists to which she calls “Christian covers.”

Desiring to make her mark through her dance and as a social media influencer, her main goal is to make sure she is giving others hope.

“Even if it’s just one person whose changed by my story, it’s all worth it. That’s been my motivation to keep it going.”

She continues, “I one hundred percent want to spread the gospel. So for me, it’s through dance, and dance is such a beautiful way to bring it to life. I want to leave a mark for the dance industry.”

When asked who influences and inspires her, she was quick to credit her choreographer, Patten, and the band that changed the trajectory of her career, Casting Crowns.

A long-time fangirl of the band that her family listened to, Sarah began commenting on Mark Hall’s personal Instagram page and sent a DM sharing how much she appreciated his ministry and how much of a fan she was. Surprisingly, Mark graciously responded saying he was praying for her, then extended an invite for Sarah and her family to be his VIP guest at one of his shows when he came into town. After a mentor relationship developed, Sarah’s dad reached out to Hall via DM and they hit it off in a friendship.

Sarah looks back, “In 2017 his video for, ‘Oh My Soul’ came out and I commented to my mom and dad that I wanted to be the ballerina in the video spinning and doing that. So fast forward two years later, his [Mark Hall’s Casting Crowns] concert was coming, and my grandma who passed away recently said, ‘you just need to DM him and ask if you can dance in his concert.’”

Taking it upon himself to fulfill Sarah’s dream, Sarah’s dad sent a message asking Hall if it was possible for Sarah to dance in one of the local Pittsburgh shows. Hall happily agreed and Sarah got her wish – dancing to “Oh My Soul” alongside a small group of dancers she was currently performing with.

“It was only supposed to be one show,” Sarah expresses. “I had one of the most amazing nights in my life and I ended up direct messaging him a few days later saying, “Hey, I cannot thank you enough for letting us perform’ and I ended up asking if there was any way I could do more shows? [laughs] And he said, ‘Yeah! You guys can do three more, pick the dates.’”

Out of the experience came a major bonus – an invitation to perform at the Hope Center in Indianapolis, Indiana for victims of sex trafficking where she was invited a second time and danced to the song, “Love Moves First” by Casting Crowns.

“It lit a fire in my faith. I’ve always been a Christian, but it lit a fire of praise, worship, and dancing inside of me for the Lord.”

Christy smiles that proud mama smile and tells me, “That’s all she really wants to do is dance for Him.

Through those open doors, she was able to meet other artists including Austin French, Zach Williams, Danny Gokey and Manic Drive. The latter being two bands whose music she got to. “Masterpiece” by Danny Gokey and “Thank God I Am Alive” by Manic Drive.

Once again, circumstances were divinely aligned as the band (Manic Drive) reached out to Sarah. Ironically, Manic Drive lost their mom and Sarah also lost her Nana around the same time. This is the commonality they shared and beautifully, the stunning video became a tribute to both their loved ones.

“On the day we filmed Manic’s, I think it was the four month anniversary of her [Nana’s] passing, and that day, it was like, ‘she’s here,’ and it was just amazing.”

Christy adds, “It was pouring [rain] 15 minutes before we filmed and there were tornado warnings in that area. We had my whole family praying,” says Christy. “We showed up and pulled in the driveway and the sun was out and everything was dry. It was like it never even rained. There is so much that goes into these things, but the grace of God shines straight through. I could sit here forever and talk about how things were orchestrated by Him.”

Coincidence? No, divine providence concurrent events that continue to mark Sarah’s life as she creates and dances through life come what may.