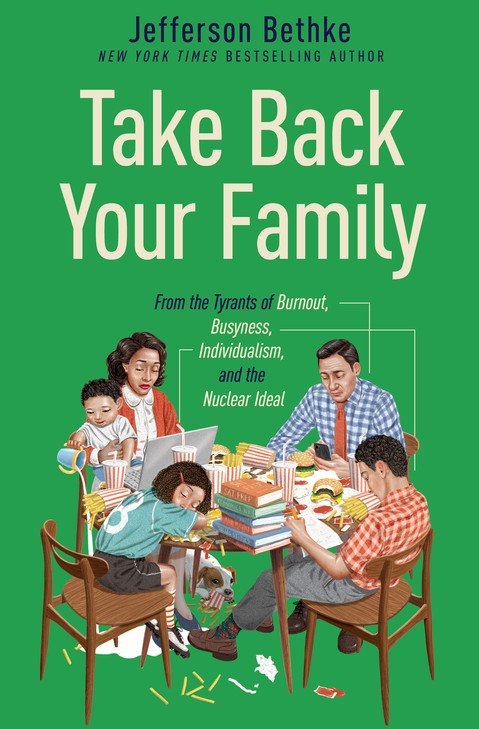 Excerpted from “Take Back Your Family: From the Tyrants of burnout, busyness, individulism and the Nuclear Ideal” by Jefferson Bethke (Copyright 2021). Used with permission from Thomas Nelson. www.thomasnelson.com

When Alyssa was pregnant with our first child, I began to wrestle with the idea of family. I felt like there was so much untangling to do. The spirit of individualism and the spirit of family as homes of consumption ran so deep, was so ingrained, and flowed throughout every fiber of our Western existence.

Most of us can easily recall or trace harsh memories or brokenness specifically with family that has caused us to feel like we have been failed by the system of family.

There is probably a very obvious reason the modern family has failed you.

I could go on and on naming hypotheticals, but the truth is most people fit into at least one of those scenarios.

I felt like the actual way we lived as a family was eating our very family. It just didn’t feel right. I needed a detox. A better story. A different image.

Around that same time, I was doing a ton of research for my book To Hell with the Hustle, which is about our culture’s view of work and production and identity formation. And I was reading a lot about the Industrial Revolution specifically, the birth of large-scale behemoth factories and the assembly line, and just how insidious that particular moment was in our country’s shaping of work and family.

And that’s when it struck me. The factory (and all its detriments) is an enormous metaphor for the Western family. Western families are factories. How? Factories are monstrosities of the Gilded Age, a time of immense economic growth in the late nineteenth century, and their job was to extract the

As writer Wendell Berry put it:

Marriage, in other words, has now taken the form of divorce: a prolonged and impassioned negotiation as to how things shall be divided. During their understandably temporary association, the married” couple will typically consume a large quantity of merchandise and a large portion of each other.

The modern household is the place where the consumptive couple do their consuming. Nothing productive is done there. Such work as is done there is done at the expense of the resident couple or family, and to the profit of suppliers of energy and household technology. For entertainment, the inmates consume television or purchase other consumable diversion elsewhere.5

So marriage in America now is only a metaphor for divorce—compete against each other and grab what you can as you negotiate how things should be consumed. Consume things, until you consume each other.

I started asking, what is the opposite of a factory? There has to be a better way, right?

Find out more about Rebekah by visiting jeffandalyssa.com