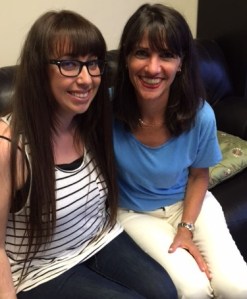 Pass It On: Brodersen’s Heart for the Next Generation

While you might know her as the daughter of Chuck Smith, His Channel host, wife of Calvary Chapel Costa Mesa Senior pastor, or women’s ministry teacher, Cheryl Brodersen is simply a woman with vision. Whether seen speaking or hanging out in the office, one can find quick wit, enthusiasm, a good story, and a Mom, Grandma, Friend, and Mentor who will welcome you with a gracious smile.

Much like her parents (Chuck and Kay Smith) who spearheaded the Jesus Movement in the 60’s to share the love of Christ with the hippie counterculture, Brodersen too has embraced a new generation. Trading in the long hair for short, bell bottoms for skinny jeans, and flowers for nose rings, this new generation is one Brodersen is on a mission to give what she has received, unconditional love.

Accepting Jesus as a reality early on in her life, Brodersen’s heart for women was cultivated early on from her own struggles confessing that she could not be the perfect Christian girl. Looking back she shared, “I was like the hyperactive, enthusiastic, but got it wrong. I was kind of the one that the teacher’s loved and felt sorry for at the same time because I wanted so badly to be good and was so hyperactive, I could never be the archetypical Christian, I was just who I was yet even in that place I felt like Jesus loved me.”

Falling into “small” compromises that stole her joy and left her frustrated in college, she began a process of surrender to God’s will and way of doing things. Little did she know that this plan included meeting her husband to be (Brian Brodersen) and beginning a calling into a ministry that she feared – women’s ministry.

Doors began opening when girls at her school admired and began buying trendy clothing and hats she sewed and crocheted. Seizing the opportunity, her mother also asked her to model her clothing at a women’s retreat that soon changed everything.

“I made my best friend to come with me and we weren’t quite sure what to expect and these older women loved on us like we couldn’t believe and instead of finding what we experienced like church ladies, we found Jesus ladies,” said Brodersen. “When I came out there with one of my outfits, they gave me a standing ovation and they cheered me on like crazy and it just did something in me.”

After getting married and entering the journey of becoming a pastor’s wife, Brodersen was handed the women’s ministry in Calvary Chapel Vista that started with two people and eventually grew to forty. Alongside her Mom, Brodersen was able to co-write a bible study on the book of James that became the first Joyful Life study and after numbers grew at Vista, the Brodersen’s took a step of faith and moved to England where she led a small study that she said, “taught her the value of one soul.”

Reflecting on that time she said, “I think all of these little lessons along the way became something so important to take in Joyful Life when my Mom handed Joyful Life Ministry to me.” Staying grounded, Brodersen was able to relate to women from her own past that included opposition with mean girls, loneliness, and fear that caused her to run out of a Joyful Life when asked to split into a small group stating, “that gave me a heart for women that they’re scared to come to these bible studies so don’t give them a lot of rules, go very gently with them and let them get to know the women and know they are safe”

Excited about the next generation, Brodersen calls women to be mothers and grandmothers to those in need and to simply be there for them.

“We have lost the whole concept of grace and because we have lost the concept of grace, we have scared this next generation. And I feel like so many women take the scroll out and say, ‘don’t do this’ and ‘do this’ and that’s the law,” said Brodersen. “We are just to look to Jesus. And I know so many young girls who are looking to the law or who are afraid they are going to be met with the law so I am praying that this church is filled with such an atmosphere of grace because it’s grace that changes everything. As my Dad wrote the book, ‘Grace Changes Everything.’”

Inspired by a time where she tried to play “Holy Spirit,” with her daughter, Brodersen

learned to take a step back and let God work sharing,  “I would just say, ‘you are doing so well, you are so brave, I know God is going to speak to you,’ and they come back and say, ‘the Lord told me this;’ ‘the Lord showed me that,’ and I’m like, ‘Yes!’”

Brodersen went on to credit these moments to God and sees dependency on Christ as a goal that leads us to give Jesus to others which she stated as “literally passing it on and not taking it back.” Referencing 2 Timothy 2:2, Brodersen used a visual that pots that pour into one another to illustrate her point.

“You got this pouring into – committing it to one group who is then going to commit it to another group. I feel like I am to be completely poured out to this generation so that this generation might be able to flow to the next generation,” said Brodersen. “You might feel like the ‘it’ generation but there’s a generation even before you and some of them are eight years old and nine years old and they need young women to love on them and pour into them just as much as the twenty year olds and the thirty year olds you know 40, 50, 60, when do we stop needing that, right?”

Overall Brodersen is compelled to give and inspires others to do the same sharing, “This has meant so much to me I want to do it to others.”

You can join Brodersen in person at The Summer Social and Joyful Life at Calvary Costa Mesa, watch her show, Today’s Faith, live on His Channel, or enjoy her many resources at http://www.graciouswords.com.