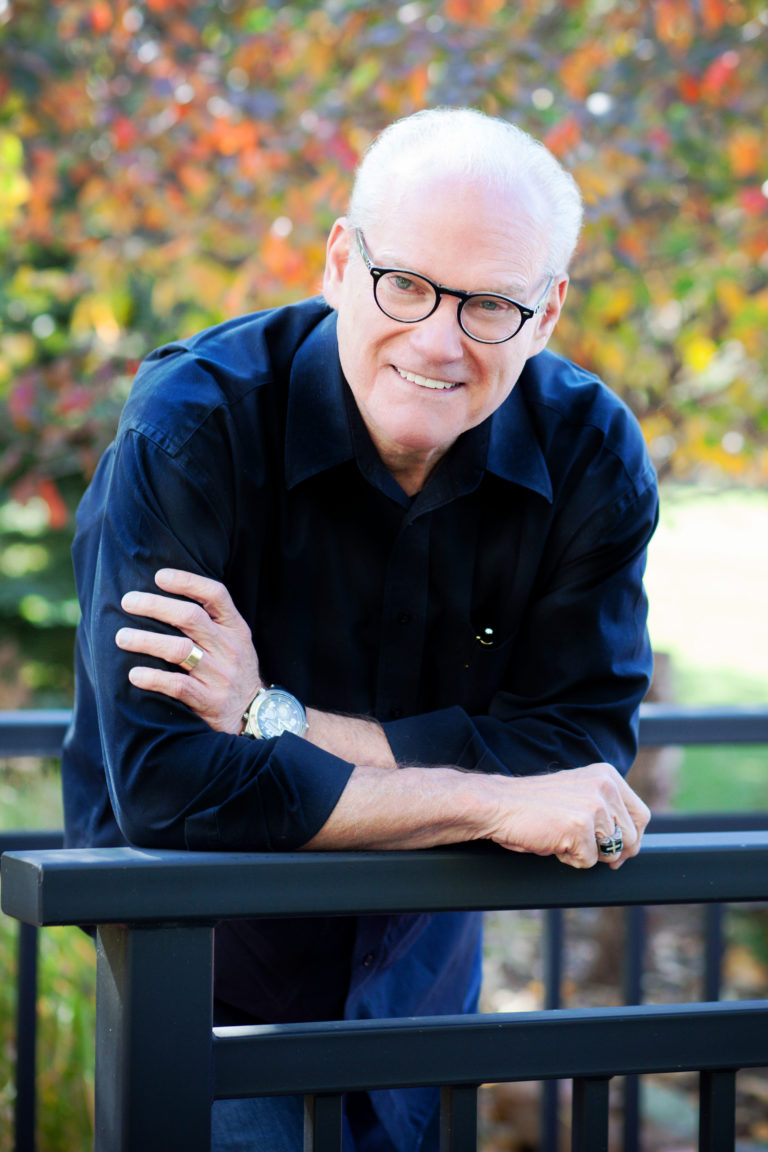 Church or unchurched, Jerry Jenkins is an household name. If you haven’t read his bestselling book series, “Left Behind,” then you’ve probably seen the hit TV series, “The Chosen,” where Jerry has now authored the first companion book entitled, “The Chosen: I Have Called You By Name.” Consequently, the new book is a byproduct of a new dynamic duo, this time with his son, Dallas Jenkins, creator, director and co-writer of “The Chosen.” In light of our new “Empowered” issue at Marked Ministry, I had the pleasure of sitting down with Jerry upon this new book release. Here is a look at our conversation on his writing tips, “The Chosen” series and book, Jesus, strength, his connection to a Marvel movie and more.

Sarah: Jerry, what an honor it is to meet you. Thanks so much for taking time to stop by Marked Ministry! Getting started, for those who don’t know, share how you got your start in writing and who your influences as a writer?

Jerry: Thanks for having me! I got my start as a professional writer at age 14 when I talked my way into a job as a sports stringer for the daily newspaper in my hometown. The sports editor didn’t realize I was still too young to drive and that my mother was waiting for me in the parking lot and had to drive me to the games I covered and back to the newspaper office. I was paid a dollar per inch of copy that survived the sports editor’s blue pencil, so I was making $10 here and $12 there and thought I was on top of the world.

By age 19 I became the sports editor of that paper.

My biggest influences were my mother – who taught me to read before kindergarten, the writers in Sports Illustrated, and my journalism teachers.

Sarah: You are a New York Times best-selling author, most known for your series, “Left Behind.” Your son Dallas is the creator and writer behind the hit TV series, “The Chosen.” Together, you are teaming up as you have written “The Chosen: I Have Called You By Name” novel as a companion to the series. Our theme this month at Marked Ministry is “Empowered.” We are drawing inspiration from Marvel superheroes to talk about faith. Most superheroes work in teams (just like The Avengers) in order to partner up for the good of humanity. In conjunction, what is it like to pair up with your son Dallas to make your mark for The Kingdom of God?

Jerry: Well, you can imagine the thrill. I introduced Dallas to the world of filmmaking by exposing him to great movies when he was a young teenager, and I’ll never forget his telling me, after seeing a particularly good one, “Dad, that’s what I want to do.”

Early in his career we started Jenkins Entertainment so he could make his own movies without worrying about Hollywood studio influence. So in that sense, we’ve been working together for years. But I stay in my lane. Book writing and filmmaking are really separate mediums, and while we consult each other and bounce things off each other, I defer to him on the film side and vice versa.

We have an unusually close relationship and interact almost daily, and it’s gratifying to be able to speak to each other in shorthand. Frankly, we don’t need to be as diplomatic with each other as we need to be with others in the business, so that saves a lot of time. If we have a problem or don’t like something, we just say so, knowing that nothing will ever jeopardize our relationship. In fact, he’s a member of my personal accountability team. (I can’t pull anything over on him! 😊)

Sarah: “The Chosen” TV series focuses on relational side of Jesus and the real people He chose to do life with. How is that empowering knowing that Jesus was human?

Jerry: Very. So much so that His very accessibility and humanity is what I believe is one of the secrets of The Chosen’s success. Jesus injures himself, grows weary, has a sense of humor, teases his friends, etc. It’s a side of Him that makes perfect sense but which, to our knowledge, has never really been examined before. He’s the kind of friend we’d all love to have.

Sarah: On the other side, Jesus chose people that were real and imperfect. And, I recently heard a quote that your son shared that talked about the power of God choosing us and elevating us to be something we could never be apart from Him. Expand on that thought.

Jerry: Again, another secret of The Chosen: God makes us who we’re not. Simon says it so clearly in the first season that he’s sinful man. While most other Jesus film treatments wholly emphasize His deity, it’s hard for us to relate to Him. But we can certainly relate to fallible humans like Simon, Mary Magdalene, Nicodemus, and Matthew. And because the Jesus of The Chosen, Who we believe is the Jesus of Scripture, is so kind and loving and compassionate and understanding, we want that same kind of relationship with Him that these people had.

Sarah: I think your books always have an element of equipping others with the truth that they are empowered by God. What does that truth mean to you?

Jerry: Bottom line, my worldview is one of hope. In the end, we are redeemed, forgiven, justified, sanctified. I want that to come through in everything I write, overtly or not. I see little value in a novel, for instance, that shows the reality of life in all its grittiness but ends in despair. It may be expertly crafted and resonate with many, but if I’m writing it, it’s going to end with at least a modicum of hope. Not every character will come to faith, but someone will have been shown the way.

Sarah: The “Left Behind” series was huge to a generation in the ‘90s and continues to live on as a major popular book series. For you, what does the book, “The Chosen” mean to you in communicating empowerment to Gen Y and Z?

Jerry: We’re suffering from biblical illiteracy in this country. My hope is that a series like The Chosen and novels like “I Have Called You By Name” will emphasize the efficacy of Scripture and the centrality of Jesus. Most gratifying of this entire phenomenon have been the myriad reports of people returning to Bible reading, church attendance, and devotion to Christ. That’s our ultimate goal.

Sarah: As you were writing this book, what did you discover about the power of Jesus’ life and ministry?

Jerry: Well, it’s based on the series and thus plays off the creativity of Dallas and his writing partners. I have been as moved and motivated as anyone else by the fulness of the Christ character, understanding more about what it means for Him to be fully God and fully human. He’s not a statue, not a painting, not a Hollywood figure speaking King James English with a British accent. He’s the one and only God Man.

Sarah: There are many today that want to write. They want a strategy or a recipe for success. What did you find that empowered you to write these stories that have written and continuing to write?

Jerry: I teach writing at JerryJenkins.com and tell aspiring authors that their Why is everything. What’s behind their desire to write? If it’s fame and fortune, they may attain those and find them unfulfilling. Rather their desire should be to educate, empower, illuminate readers.

Ironically, I was never called to write. I was called to fulltime Christian work as a teenager and assumed I would have to give up my writing dream and study to be a pastor or a missionary. But a wise counselor told me that God often equips us before He calls us, so I shouldn’t be too quick to give up the vehicle that could help me fulfill my call.

That changed my entire outlook on success. It isn’t in bestsellers and great reviews and royalty checks. I succeed when I obey my calling – simply writing for the glory of God. Sales and all the rest are out of my hands anyway. All I can do is the best I can do, heartily as unto the Lord.

Sarah: Looking at the “heroes” that Jesus interacted with. Who do you relate most to and why?

Jerry: That’s the beauty of “The Chosen.” The people Jesus called were anything but heroes when He called them. They became heroes of the faith we revere two thousand years later because He made them what they were not. So really, as a flawed human, a sinner saved by grace, I relate to all of them.

Sarah: Fun question, Stan Lee was a writer. You are a writer as well. Is there a superhero that inspires you as a creative writer or something you appreciate about Stan Lee’s creative works?

Jerry: I’ve always been a Superman fan, though I can’t say he or Stan Lee have inspired me as a creative writer. I will say I was stunned almost to disbelief a few years ago watching a Spiderman movie where Lee was making one of his famed cameo appearances – as a librarian. Spiderman and the villain were having a knockdown drag out fight in the library and at one point a character is thrown onto the floor, right atop a plain-as-day copy of “The Mark” – one of my Left Behind titles.